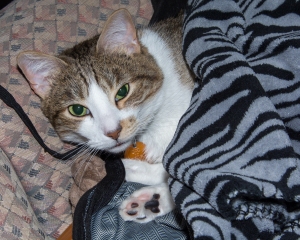 I can almost feel the gaze of the beast upon me as it lurks in the darkness, just out of my sight. My muscles tense as I peer from side to side, but to no avail. The second pass by like hours as I wait for the inevitable strike. After several minutes, nothing happens, and I start to relax my guard. Only then does the gray and white blur burst from the shadows, its paw streaking through the air toward my leg. The claws, as always, are only partially extended. It’s little more than pinprick as it hits my leg. My assailant then dashes off into the shadows once again, his collar bell jingling, almost a proxy for what I imagine to be the little imp’s laughter.

Despite my best efforts, our goofy little manx Jackson has struck again.

We first saw Jackson more than six months ago at our local PetSmart, in their on-site adoption area. My fiancee and I often stopped by the adoption area to look at the cats, though we weren’t looking for a new addition to our family. Every so often I’d meet eyes with one of the cats and feel the pangs of wanting a pet again, but I didn’t want to pull the trigger unless everything was right.

Then one day I locked eyes with the saddest pair of green eyes I’d seen in some time. I could hear his plaintive meow even behind the plexiglass window. It took a minute to realize the little guy didn’t have a tail. At first, I wondered if he’d lost it in an accident. But upon reading his info card, I saw he was a manx.

I also read that he was sad after being given up by his previous owner because they’d been diagnosed with cancer.

I let him chase my finger around the surface of the glass a moment, but I could tell he wasn’t too interested in the game. Eventually he returned to the back of the cage, curled up and went to sleep. I watched him a moment longer, then rejoined my fiancee and left the store, our business taken care of.

A week later, we went back and Jackson was still there, every bit as shy as he’d been the week before. He perked up a little when he saw me, but still didn’t seem too interested in playing or doing much more than lying around. The info card told us he’d been shy and sad since they took him in, and he needed a good, patient home. When I’d volunteered at an animal shelter in Arizona, I spent a great deal of time with shy dogs, working to bring them out of their shell. Between his history and temperament, he pushed a lot of buttons for me. I brought my fiancee over and showed her the little guy.

“If only we were ready for a cat,” I said, and we walked out again.

We stopped somewhere for dinner later that night, after we’d run our usual compliment of errands. About half way through the meal, I looked to Christie and admitted the truth.

“I keep thinking about that poor cat, Jackson.”

She agreed his story was a sad one, and he kept finding his way into the conversation a few more times that weekend. It was a nice distraction from the Big Issue, namely my upcoming fifth and hopefully final surgery. Part of that recovery entailed being home bound. As anyone who has been through surgery can attest, there’s an unavoidable period of depression that settles in. The last surgery had been especially nasty in that regard, and I’d admitted a few times to being more scared of that than the procedure itself.

It seemed inevitable the two issues would eventually collide. I can’t remember where we were going, but I know we were in the car when I made the half joking suggestion we should adopt Jackson so I’d have a companion while I was stuck at home. The joke turned into a serious discussion, and by the time we got home, we’d made plans to really look into the idea and see whether or not it was feasible.

A week later, we were setting up the apartment with the supplies we’d need to bring a cat home. We’d decided to set up our bedroom as his initial “base of operations”, with his litter box, food and scratching post in place. We’d eventually branch out as he got more comfortable in the house. Everything was set, and after a long week at work, we got up Saturday morning and went to PetSmart, all ready to bring home the newest member of our family.

Imagine my horror when we saw a young couple by the adoption area, a cat carrier in their hands.

I dashed over and let out a huge sigh of relief when I saw they’d adopted one of the other long term residents of the adoption area. We talked for a few minutes, and they admitted they’d come very close to adopting Jackson, but decided on the other cat at the last minute. We immediately went into the adoption area and sat with the new member of our family.

Jackson’s first night in our home was memorable for his creativity. Like most pets who enter a new home for the first time, the little guy was scared and uncertain. It took him only a few minutes to dash from the open pet carrier under the bed. We backed off, leaving a little food in his dish and the litter box accessible, then left him alone in the room.

A short while later, I went in and could not find him.

His disappearance caused a mini panic, during which we wandered the entire apartment, wondering how he’d managed to sneak out. Finally, as I looked under the bed yet again, I caught sight of the unmistakable eyeshine of a cat. But it wasn’t coming from the floor. Jackson had found a gap in the fabric that covered the bottom of the box spring and crawled inside. We lured him out with a few treats, but he only stayed a few minutes before he darted back under the bed.

He made a few more appearances before I decided to call it a night. I curled up under the blankets and nodded off. I awoke a few hours later to a strange pressure on my abdomen. At first, I worried that another complication from surgery might have manifested itself. It took a moment to register that the pressure was, in fact, a small manx cat who’d decided to venture out from under the bed and found a place to sleep, curled up right on top of me.

He’s slept in the bed every night since then.

Today, Jackson is a far cry from the shy little thing that most of his first weekend huddled under the bed. Accustomed to us both, he’s shown a mischievous personality that likes to play tag at unsuspected moments and wants nothing more than to slay our shoes, lest his people venture away from the apartment for too long. He loves to attack the loose grout in our kitchen and any scraps of paper that might be lying around the apartment. Any time he sees me in the kitchen, he follows and does his best impression of a starving kitty.

Owning him isn’t without his frustrations. On one night, his attempts to start a game of tag sent a bowl of piping hot soup into my lap, right into my surgically repaired abdomen. He’s wandered across displays shelves, onto the top of tables and once, almost in the refrigerator. And his less than reliable aim when jumping onto the bed has had me singing soprano more than once.

But when I came home from that last surgery, I never really felt alone. Even though he loves to sleep on top of us, he’s not really a lap cat. But he never strayed far, whether it was taking a spot on the couch next to me or curling up by my feet when I went to the computer. When I found myself hurting badly a few times, he’d rub his face against my hand and unleash a bevy of purrs. I’d wanted a “recovery buddy”, and Jackson did a fantastic job in that regard.

Today, we just can’t imagine life without the jingle of his collar. Even when he decides my Kindle is his newest sworn enemy or almost trips one of us as we walk across the living room, it’s impossible to stay mad at the little guy. His various personality quirks, like the way he turns his nose up at first when food comes out of the microwave or meows incessantly if either of us are behind closed doors, have become endearing. There’s nothing I like more than coming home from a long day at work and opening the door to our bedroom, letting what we’ve dubbed the kitty rocket escape and make his rounds, before he settles onto the couch and joins us to eat dinner and watch movies.

The funny thing is, they call animals like Jackson rescue pets. I used to think that was because we rescued them from the shelter, but I think that’s totally wrong now. They rescue us from far less interesting lives without them.

Author’s Note: Since writing this particular piece, we’ve added two more rescue animals to the mini zoo that makes up our home: a rescued feral tortie cat named Celeste(after my favorite red panda) and a sweet, blue eyed lab mix named Sapphire who came to us with a paralyzed front paw. Those three have enriched my life in too many ways to count, and it all goes back to their goofy older brother.