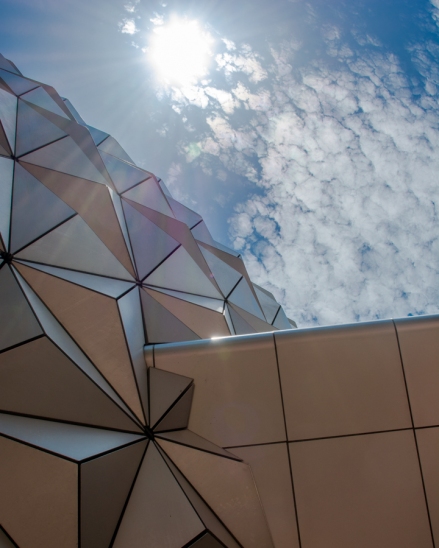 To paraphrase a line from a popular TV show, change is coming. Specifically, its hand looms over the second oldest park in Walt Disney World, the first non-castle park in the company’s history and the last to have been directly influenced by Walt Disney himself. What form it takes, and how closely it will resemble the design or even the philosophy that led to its creation are the questions that remain.

You could argue it all started when The Living Seas gave way to The Sea with Nemo and Friends, but it certainly accelerated with the Frozen overhaul in the Norway pavilion. With the largely dormant Wonders of Life pavilion(now used only as a festival center), Innoventions in jeopardy of closing with the uncertain future of Sum of All Thrills, and of course the rumors swirling that Universe of Energy will give way to a new attraction based on Guardians of the Galaxy1, it’s clear those will only be the start.

Nostalgia runs strong for Disney fans when it comes to the original Epcot, myself included. As I’ve talked about in my Disneymoon posts on this site, I almost teared up when I caught sight of Spaceship Earth for the first time. Epcot fans will toss around names like Dreamfinder, Buzzy and Horizons, characters and attractions lost to time, and lament the possibility of more joining their ranks. However, change is a major part of the Disney parks and not only is it inevitable, it will be vital to Epcot in the coming years.

While Epcot remains the second most popular park in Walt Disney World in terms of overall guest attendance, the gap between it and both Hollywood Studios and Animal Kingdom continues to narrow. Animal Kingdom will likely see a bump with the opening of the World of Pandora in 2017, and the Star Wars and Toy Story expansions in Hollywood Studios might well be enough to propel it into second place. But the real challenge for Epcot isn’t just in Walt Disney World, but in its rival as well.

Universal Studios released information on the upcoming Volcano Bay, and rather that advertise the new area as a water park, like the pair on Disney property, they are touting it as their third theme park. With their major land acquisition, the addition of Dreamworks properties and partnership with Nintendo, it’s clear that Universal Studios are also in the running to welcome more guests than Epcot. Disney won’t take that lying down.

The question that remains is what form that change will take. What most people don’t realize is that it already almost happened ten years ago.

You could argue the identity crisis started in 1994, when Epcot Center was renamed the creative Epcot 94, courtesy of updates to Spaceship Earth, the transition of Communicore to Innoventions and the opening of Honey I Shrunk the Audience, among other changes. Epcot 94 gave way to Epcot 95, which came with fewer changes. Rather than rename the park year after year, 1996 saw the name change to simply Epcot.

Changes continued into the new millennium. Ellen DeGeneres set up shop in the Universe of Energy, and the divisive changes to Journey into Imagination arrived in 1999. Even venerable Spaceship Earth got a facelift, with Mickey’s hand holding a sorcerer’s wand arrived to ring in 2000… and stayed for seven years. But if the Imagineers had their way in 2006, the wand wouldn’t have been the only thing to change.

In fact, Spaceship Earth would have been no more, with the attraction Time Racers being set in The Ball. Yes, really.

Future World would have become Discoveryland, with The Living Seas being rethemed to The Little Mermaid, a roller coaster based in The Land and a hedge maze leading to Journey into Imagination. The general idea was to replace the cold, concrete look of Future World with something more vibrant. Budget concerns limited those plans, but it’s clear that Imagineering has known for some time that Epcot needed a refresh. It’s just not clear if the Discoveryland idea would have worked in the park’s favor.

However, re-imagining parks isn’t always a bad thing. Take California Adventure, for example. When it opened in 2001, its attendance flagged far below expectations, and the park was savaged in reviews. Living in southern California at the time, California Adventure became something of a local joke, not quite the infamous disaster of EuroDisney but still unpopular, particularly among the locals who are such a major part of the park’s revenue.

Changes started in 2007, and by the time the popular Cars Land opened in 2012, Disney California Adventure went from a laughing stock to a major attraction for both vacationing families and locals. The Imagineers accomplished this seemingly impossible feat by taking the basic concept of a park dedicated to the California experience but taking it in a different direction. Rather than try to depict a realistic version of the state, Imagineers based the lands off different eras and created a romanticized version.

Perhaps a similar take could work with Epcot.

“To all who come to this place of joy, hope and friendship, welcome. Epcot Center is inspired by Walt Disney’s creative genius. Here, human achievements are celebrated through imagination, the wonders of enterprise, and concepts of a future that promises new and exciting benefits for all. May Epcot Center entertain, inform and inspire. And, above all, may it instill a new sense of belief and pride in man’s ability to shape a world that offers hope to people everywhere.”

With those words, Card Walker dedicated Epcot at its official opening in 1982. If an Epcot redesign is to come, those words should guide the vision. As a long time fan of the park, I personally don’t mind if characters become a bigger part of Epcot, both in Future World and World Showcase. In fact, I’ve shared a few of my thoughts on who in the Disney family might best fit in, and in future installments I hope to revisit how I’d approach the park.

But Epcot should retain not only its focus on technology in Future World, but more importantly it should present a optimistic view of the future. Whatever the Imagineers decide to do in order to update the park, the guiding principle should be making sure that every guest who exits does so with a renewed sense of hope for the future, just as Walker said in 1982.

Change is coming to Epcot, without a doubt. Whether that is a good or bad thing remains to be seen, but I have faith in the Imagineers. If we’re lucky, it will bring a new sense of joy, hope and friendship to guests in Walt Disney World and beyond. Positivity is something we could all use a little more of now.

Not So Hidden Mickeys, AKA Footnotes

1 – With the exception of the Wonders of Life, these rumors should still be taken with a grain of salt, if not the whole shaker. Sum of All Thrills was rumored to close at the end of June and is still operating, while there’s some great discussion on a recent episode of The DIS Unplugged podcast on why the Universal contract might not allow for Guardians, even though they’re not part of the licensing agreement.